We’ve had a very vocal user complaint about our no longer supporting Gingerbread (Android 2.3) in future updates of our YouMail app.

We generally want happy users, so why did stop supporting anything before Ice Cream Sandwich?

First, Gingerbread’s market share is shrinking fast.   According to App Brain’s most recent survey, it’s about 9.5%, after being over 16% just 5 months ago.  At that rate, it’s only 9 months before it almost completely disappears. 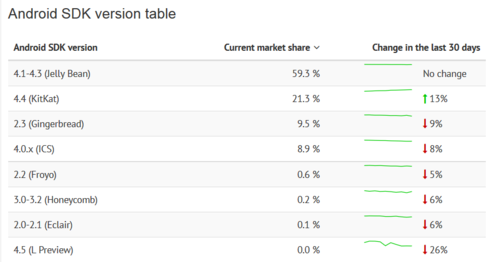 Second, our users have been rightfully pushing us hard to rebuild our user interface so that it’s easier to use, looks better, and performs faster.  That means using elements like gesture-based actions, a left navigation drawer, a native action bar, and more.  Those are all native on later versions of Android.  But to do that on Gingerbread required the use of numerous third party libraries, such as ActionBarSherlock, which add development complexity and quite often hard-to-find bugs.   Combine that with much smaller memories and weaker CPUs on many Gingerbread phones, leading to all sorts of additional optimization that’s needed on the older platforms, when we actually went through and estimated the effort, it’s roughly double to support pre-4.0 Android devices, since everything gets effectively built and tested twice.

Looked at that way, it’s an easy decision to drop supporting new updates for Gingerbread, and put that extra 50% of development into further improving the app for the 4.0+ users.

The result is that you should see our Android app improve much more quickly in the days ahead, as we continue to improve the user interface, fix the various issues users have been reporting with contacts and greetings, and make sure everything users can do on our website is available through the app.