Like most app makers, YouMail takes app store reviews seriously.  We read them all, every last one.   Positive reviews tell us when we’re headed in the right direction, while negative reviews help us better understand where we need to improve.    In fact, we actually discuss negative reviews daily.  We try to contact those users to learn more about their problems.  We try to replicate issues if we haven’t seen them before.    And the problems highlighted by these negative reviews go on the top of our “todo” lists.  Some spot-on negative reviews have even led directly to the whole team pulling multiple all-nighters to get an important issue addressed, and/or make major changes in how our app works.

Underlying all of that focus on reviews, though, is a simple assumption:  the reviews are real – they come from real people, who really downloaded the app, really tried to use it, and then really had a good or bad experience they want to share.

Recently, however, we’ve been hit with a barrage of demonstrably fake reviews from another visual voice mail app marker.    First, the positive reviews for the competitor, all glowing, and almost all done on June 14th. 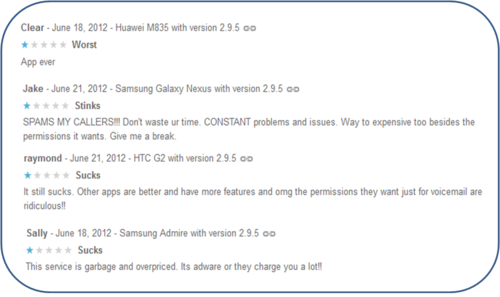 Why do we think they’re fake?    Well, how often do people, who are completely happy with one app, jump on the competitor’s app with bad reviews a week later?   And then on top of that, have one word reviews (“sucks” and “worst”) be highly rated in the “helpfulness” department?

It’s really a shame that a competitor feels they have to cheat to try to keep up – and blatantly violate Google Play’s commenting policies.

We think this sort of behavior needs to be called out, whenever and to whomever it occurs.   And since we’re sure we’re not the only ones who see this, we think app stores need to help address this problem.   We actually think there’s a simple solution – just allow an app-developer to comment underneath each review.

It would be easy to implement – with the developer account seeing an editable comment when it’s reading through reviews, and then storing and displaying these comments along with the reviews.    (A more aggressive approach would also add how long the reviewer has had the app on their phone – so you could actually see who is downloading just to give negative reviews).

With that, users could easily decide which reviews are real – and make an informed choice.    And the nonsense reviews we’re seeing would wind up mostly being a waste of time.

[Note: Shortly after posting this, we found that Google is already testing something along these lines with some  Google Play developers! We can’t wait for it to go live.]

Oh, and by the way, we do see the REAL negative reviews about our current release, and we already have an update in QA, which should get posted on Friday or Monday at the latest to fix them!